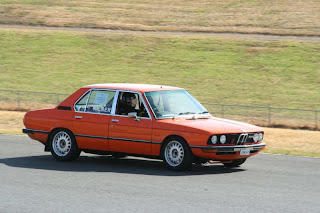 The Eastern Creek round of the supersprint series started well for the e12, with the new rear coilovers appearing to provide much improved grip in both tight and long corners. The car was hooking up so well that we (Hak) got best time in our class in morning practice. I maintain that I could have gone as quick, but had to pull in as there was a repeat of the extractors vibrating against the steering box and I had a sticky throttle! 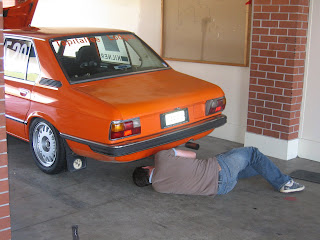 The afternoon session only lasted 1 lap before there was a very strange noise from the exhaust. Expert opinion named it as a collapsed muffler! While I cruised around to record a notional time, all chance of the win was gone and we packed up early. The drive home was excruciating, especially with the development of a large amount of backlash in the drive train.

Bel's e21 ran like a train all day and performed excellently. Hak did discover a missing bolt in the rear subframe mount after arriving home, but it didn't slow her down.

Next outing for the e21 will be Wakefield Park, but it's rest time for the e12. We'll need to save up some budget to get the exhaust fixed and the new 5 speed gearbox in.
Posted by Pete Kilner at 8:15 pm No comments: