In the process of packing up the e12 to be stored while I'm in the US, I removed the wheels to clean out all the rubbish. In doing so, I noticed a strange wear pattern on the fronts. They are worn about 2/3 of the at out to the outside of the car in a distinct "valley". I'm not sure how this came to be. Maybe it was too high air pressure? It also happens to be about the same point as the edge of contact due to the amount of camber we run. Intriguing! 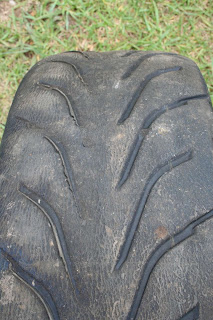 While I was in the shed, I took the opportunity to pull the motor, gearbox and diff out of the old wrecks I had lying around. Dad's new hoist paid for itself the first day. It made life so much easier. 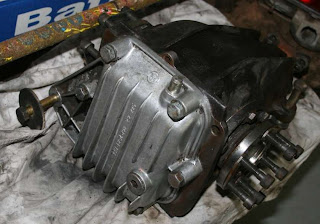 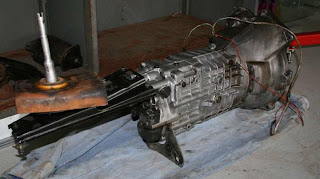 Final Run for the E12

As Bel and I are moving to the US early in 2010, the October round of the BMWDCNSW championship was the last round I would get to run in for quite some time. I decided to take the e12 out as it was a special day and I wanted my special car for this one!

There'd been some upgrades with a new camshaft installed (a Schrick 304) and I had hopes for big things. It had been quite a while since I'd been out, so the start was pretty slow. I began with 2:07 which was slower than last time I'd been there. Not looking so good for a car with (a little) more power (the camshaft was too big, so we had about 5kW more, but under 4000rpm was pretty sad). I also cut a power steering hose as it was rubbing on the body, so that slowed me down for a session while we fixed it (thanks Peak Performance for their help!).

Things started to get moving in the afternoon session and the times started to come down. First to 2:05, then 2:04, high 2:03 and then 2:03.1 on the last lap of the day. I think that shows there was still some more pace to be found. At that point of the day, everything was a bit overheated and could do with a rest! Still, 2.5 seconds under the personal best and a new club record for Class B was a great result.
Posted by Pete Kilner at 7:40 pm No comments: 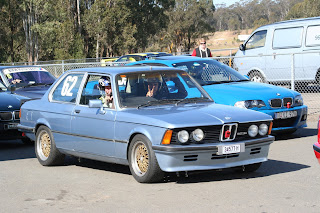 Team Orange headed to Oran Park to celebrate Fathers' day in September. Bel's step-dad Wayne went out in the e21 and my Dad headed out in our trusty Ford Laser. It was a beautiful day but very sad as it was the last time the BMW club would drive there before the track was demolished to build more houses. It is a terrible waste and a horrible end for one of our finest motor sport venues! 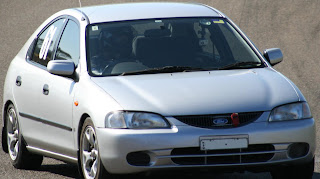 The day itself went well with both Dads getting into it and having a great time. The e21 ran without a problem for the whole day while the Laser was fine except for a small coolant leak at the inlet manifold that was solved with some judicious cutting and extra hose clamps. 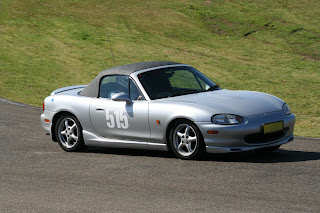 Andrew was also there in the MX5 and had a great day mixing it up with the bigger cars. The reward for his efforts was race rubber stuck to his road tyres that refuses to come off!

Must send out special thanks to Tom and Robbo for being the trainers for the guys.
Posted by Pete Kilner at 7:14 pm No comments: