The Number Plate Fiasco!
We spent an incredibly frustrating 1.5 days changing the front number plate on the e21 over the weekend. I actually went to fix a rattle in the front driver's side strut. That took all of 5 seconds (it was a loose nut on top), so I thought I'd put on the new Historic Plates. Turns out the old plates were pop-riveted on to the fibreglass Alpina bumper/spoiler. We drilled those out and figured we'd just put some small bolts through. First problem - new plates are smaller and there is an ugly section where the old plates were. Easy - we'll attach a piece of aluminium to the bumper then the plate to the aluminium. Next problem - there was no way to get my hand behind the bumper to put the nuts on. This was obviously why the old ones were riveted. Next solution - loosen the bumper to allow hand in there to do the bolts up. No good - The grill is in the way so it won't rotate far enough. So ti was time to take the grills off. Once the grills were off, I took the bumper off completely as it was already disconnected. The actual attaching of the plate was about 10 minutes. Then we could start re-attaching things. The bumper was a bit of a pain. It wouldn't line up properly and the attaching screws were embarrassing - most were wood screws! Finally got the bumper in about the right spot just in time to tidy up as it was getting dark. 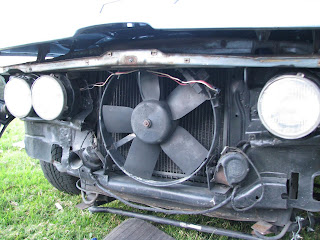 Got back into re-assembly next morning. I decided to use some better grills and blinkers off the wreck out the back as the old ones were all cracked and the attachment points broken. They looked good after a tidy up. The next problem was that the driver's side blinker wouldn't line up. It turned out to be the grill not lining up as the blinker is mounted through the grill - thank you BMW :( . This was because the headlights were in the wrong spot, forcing the grill towards the centre of the car. Some inspection showed that there had obviously been an accident at some point and the front of the car was badly repaired. I knew this when I bought it, but had no idea it was this bad. 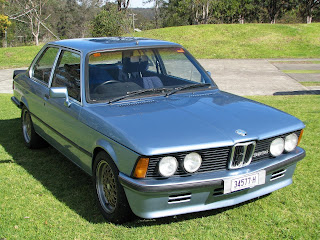 The light mount was still pushed in about 10 mm. So we took the headlight assembly out and fixed it as best we could, then elongated the mounting holes to get it in the right spot. Now the grill fitted nicely. The other grill was less of the same and we managed to get it in with less swearing. I also took the chance to fix the broken passenger side blinker while I was there. Finally got the centre (kidney) grill on again and added all the missing screws that the dodgy repairer hadn't bothered with. Also put some grill clips from the later e21 just to be sure. Gave her a wash and she looks exactly the same! Luckily, I know how much better it is underneath.
Posted by Pete Kilner at 9:40 pm No comments:


We're busy helping Dad build the new headquarters for Team Orange, otherwise known as his new shed in the backyard. This is no ordinary shed though. It's 20m x 10m x 3.1 sidewall. The 3.1m sidewall is high enough to allow installation of the car hoist he has put a deposit on. There's room for 11 cars (as long as they are Escorts or BMW and not another Prado) with still enough space for a 6m x 10m workshop. He's already purchased a lathe, pedestal drill, band saw, benches and loads of other miscellaneous tools. It promises to be a real heaven for petrol heads. 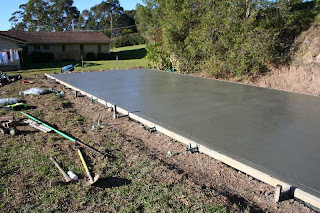 This photo is just the first section of the slab. There's another 4m to go on the left hand side yet!
Posted by Pete Kilner at 6:35 pm No comments:

Great Debut for Matt at Wakefield

We headed down to Wakefield on Sunday for the 4th round of the BMW Drivers Club NSW Supersprint Championship. Matt was making his "debut" in Bel's e21 323i so there was plenty of excitement in the lead up. The e21 was primed with a rebuilt front shock, new rear Konis, modified rear springs and the experimental double sway bar set up front and rear. 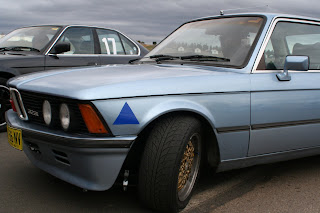 Matt had a great start getting the car and himself through practice with no dramas and some solid times. Rough hand timing had him at about 1:25. The afternoon kicked off nicely with times straight down to high 1:23s. More time came off in the second session with some really consistent runs culminating in a 1:23.0. Sadly, the same front shock started to play up with some (as yet) undiagnosed rattles!

Matt stuck with it until the end and, quite literally, drove it until it stopped; with the e21 running out of fuel in the last session of the day! It was a great result as it is the quickest time for the e21 ever around Wakefield. Matt had a great day and we all enjoyed his spirited driving.

Suspension work for the e21
I've been using the time off from track days to get some work done on the e21. The front driver's side shock was rattling, so that's out to be replaced. Turns out it was from a 2002, but it is also a Bilstein sport, so better to fix that replace. As with all things Team Orange, it turned out to be much more complicated that it should have been. Luckily, some help from Herbert at Bavaricars saw me fixed for no cost! Just needs to be re-fitted and we're good to go. My wife's, sister's partner is coming down in 2 weeks to drive the e21 at Wakefield, so it needs to be in top condition.

Since I had the opportunity, I've made some adjustable coilovers for the rear of the e21. If I'd known it was that simple, I'd have done it years ago. Doesn't really help with the ride height yet, at the springs are still stock(ish), but is all ready to use the Eibachs when I upgrade the ones in the e12.
Now I've got all the bits, I just need to get them back into the car!
For those that are interested, I've detailed out what I did to make the coilovers:
1. Buy car that happens to have a spare set of Koni adjustable shocks left in the boot with some aftermarket springs! Alternatively, you can buy them. Most Konis are rebuildable, so a decent second hand set will do for starters. Bilsteins have a similar mounting system, but are more expensive. Depends on you wallet and your needs. 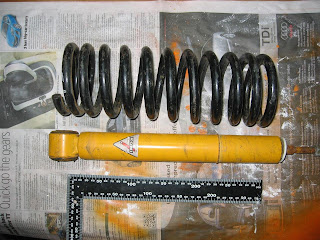 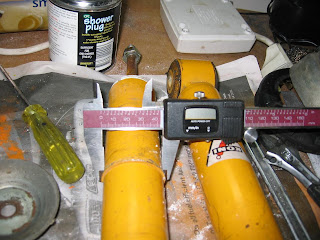 3. Purchase threaded collars with ID to suit OD measured in step 2. Make sure you also buy spring seats and locking rings. I bought mine from Fulcrum and they were $120 for the two sets delivered to work. 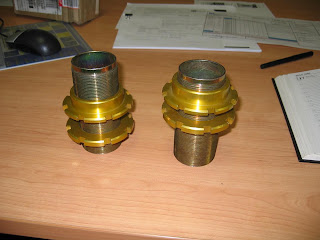 4. Remove existing struts from spares car (or from original car if you're brave enough) 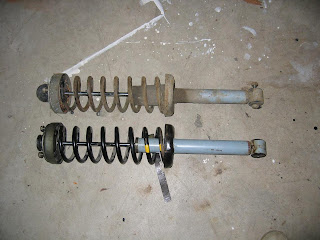 5. Remove lower spring seat. On the Boges, it was just pressed on, so some good solid hits with the hammer got it off.
6. Cut out the centre section to suit the spring seats. In this case, mine are to suit 60 mm ID springs. I cut it out by drilling a series of holes and using a jigsaw. 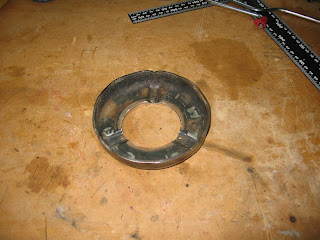 7. Apply electrical tape to take up 0.5 mm gap between shock and threaded collar. 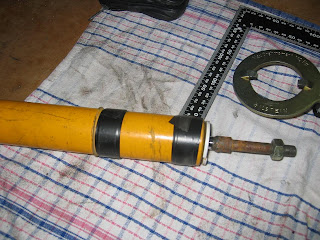 8. Fit collars and seats to shocks. 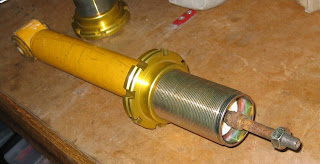 9. I trimmed the springs by a couple of mm to remove any preload. I didn't want any, but this is up to personal preference, requirements and springs.
10. Trial fit to make sure it all works. 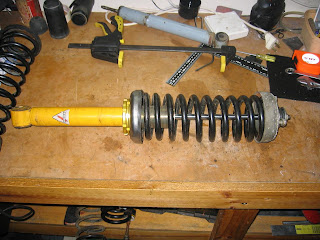 11. Paint the bits you worked on and put it all together. 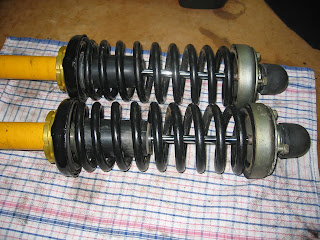 One set of coilovers complete. There won't be any downwards adjustment unless you buy a set of superlow springs. Then you could adjust them up for daily driving and down for track or show.
Posted by Pete Kilner at 3:33 pm 1 comment: 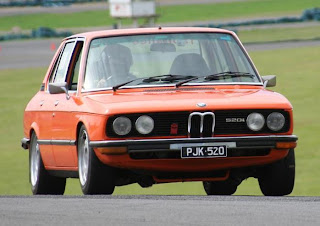 We got very lucky with the weather at the BMW Club Nationals over Easter with almost no rain during the events and a completely fine day at Oran Park. The e12 was at the Show of Excellence although it's there to fly the e12 flag, not to be judged. We also entered the Supersprint at Oran Park. The e12 was first in class B at the supersprint with a time of 1:30.79. Not bad for a tired old four cylinder!
Posted by Pete Kilner at 8:40 pm No comments:

Ready for the Nationals 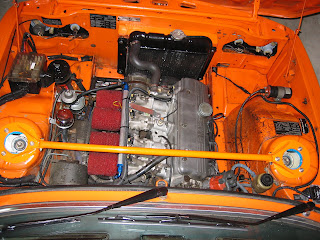 The e12 is finally ready for the Nationals. I painted up and installed the front and rear strut tower braces and gave the old girl her annual wash and polish. Not bad for a track car. 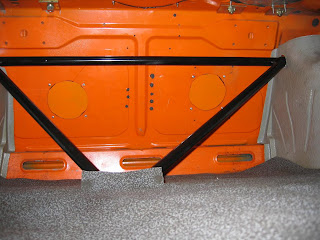 Posted by Pete Kilner at 8:26 pm No comments:

The last two months have seen very slow progress on the e12. Since the last post, I've pretty much only done the two strut tower braces. I did manage to get the all the lights back in and working and re-install the grill. The strut tower braces took many long hours with the drill, file and hacksaw, but it was a learning experience and beat just buying one! 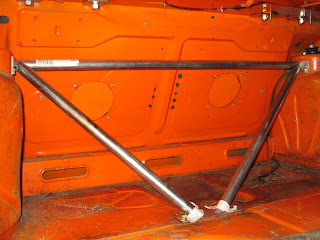 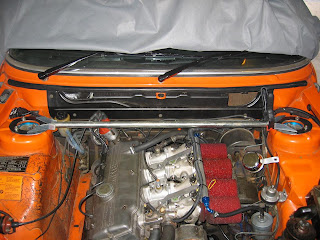 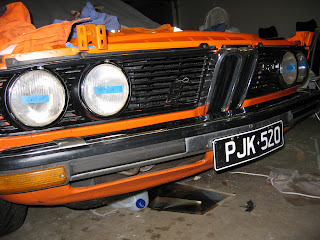 Grills cleaned and re-fitted
Posted by Pete Kilner at 5:47 pm No comments:

Parts Going Back In 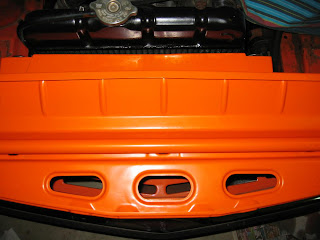 Started getting some of the e12 back together at last. The front paint work is "done". There's still more work to be done, but I've got to stop somewhere or I'd be repainting the entire car! The radiator looks a lot better with some new paint, but the inside was amazingly clean. There was no gunk in there at all! While the radiator was out, I took the chance to remove the fan (there's a thermo fan in there as well) and tidied up some of the hoses. 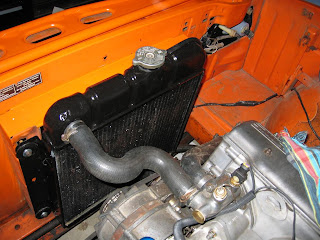 The headlights were in a shocking condition. One was rusted through to the inside reflective surface and one has cracked glass. I wasn't able to get new ones easily, so the old ones copped a bit of paint and went back in until I can get the new ones. The headlight mounting bracket was very rusty, so this got a good scrub with the wire brush and some new black rust guard paint. Looks much better. Some idiot replaced one lamp with a non standard one and got rid of the nice neat electrical mount, so I'll need to do a search for one of them too. 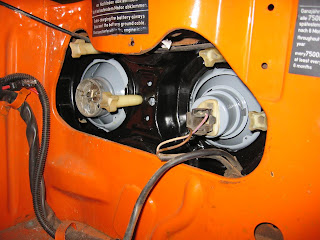 Still plenty of work to do, but it's finally coming together.
Posted by Pete Kilner at 4:20 pm 1 comment: