Tearing it Down to Build it Up

Work started on the Mustang this month to get the front end tidied up before Mum and Dad's next visit in 2012. It all started with the simple idea to whip the front fenders off and apply some rust proofing. This proved to be a major exercise as the previous owner was an idiot and had painted right over everything including the panel joints. I certainly spent some time cursing him over the last few weeks. 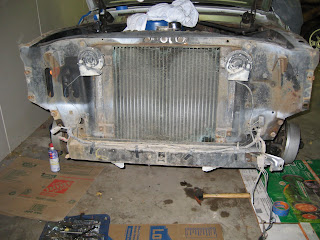 It's been a real learning experience to get the panels off. I read the workshop manual, but it is way too general. The number of little bolts and screws was amazing. Then there was the matter of all the extra bits and pieces that had to be taken off before you can get to the bolts. Things like splash guards, brackets, lights and wiring before you even get to the mud and rust. Despite all the mud and rust, there was only one bolt that had to be cut off.

After managing to get the panels off, it was time to attack the suspension. I needed to get everything off in order to get the build up off the inner guards. After successfully making my own ball joint splitter, I got the springs off and removed the masses of dirt that had built up over the last 40 years. The inner guards turned out to be OK, but the rust holes in the top of the guards was not a good sight! I've cut it out since the photo and it's ready to have a patch welded in. I just need to go buy a welder and find the time to get organised to do it. 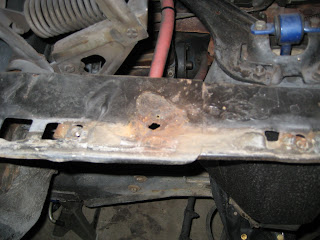 Now that it's all torn down, it's time to start painting the parts and put things back together. The new angle grinder and wire brush have been getting a work out and there's plenty more to go. I have all the components to strip back and clean up. I want to get them all painted before I start work on the car itself.
The original paint is a matte or satin finish in the engine bay and it's hard to tell under the guards. It seems to be black with sound deadening bitumen, but it's also got layers of paint, especially the white over spray from the stupid owner. There's also a good layer of dirt and surface rust on everything.
I've got a gallon of Chassis Saver paint which is supposed to be the best for painting over light rust. I need this as I won't be able to completely clean up the surfaces under the guards. I got this in satin to match the classic look. 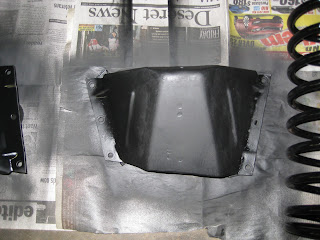 The components which are hard mounted to the car will be painted in satin as well. Things like brackets or supports. I decided that the parts that are not hard mounted - like springs, control arms, shock absorbers - will be painted in gloss to give a bit of contrast. The paint shop is a bit rough (since it's the garage) and one of my biggest problems is that it is bloody freezing which is not good for painting. Can't do much about that, so it's time to push on. 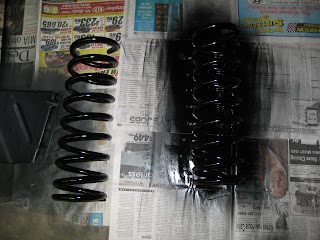 Posted by Pete Kilner at 8:30 pm No comments: