It's been a year since my last post and boy, have we had some changes! Not just in cars either. The big news is that Bel and I have moved back to Australia. Of course, the good news is that this means out with the old cars and in with some new! On the other hand though, it was said to see the e46 330xi go after 2 years of dedicated service. The other thing that had to happen was to finish off the front end of the Mustang. 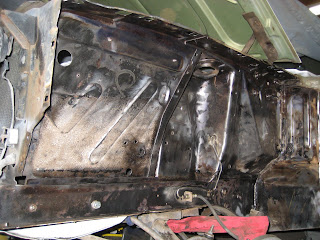 I got all the old paint, grime and surface rust off the inner guards. While I was there, I cut out the rust above the tyres and welded in some new steel. Little bit of bondo and she was looking better than new. I could then paint up the top of the inner guards all in matt black. I got the Chassis Saver paint on, but since it was freezing (not metaphorically, actually freezing!) I had to rig up some heaters to get it to go off! After that, I sprayed on some Rustoleum in matt black to give it the stock look again. Looked really smooth. I touched up some of the areas that hadn't been painted white by the idiot who'd painted the rest of the car. That left the car ready for suspension again. New upper control arm and pivot, new top ball joint, replaced spring perch rubbers (as the old ones were worn through). Everything else was in good condition, so just a good clean up and some new paint brought them back to scratch. 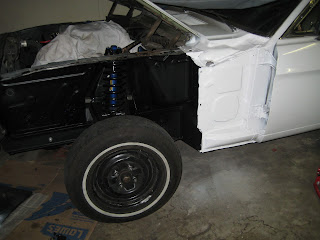 Once the underneath was sorted, it was time to get on with the outside. The headlight buckets just needed some paint and a polish. The fenders on the other hand, were bloody rough. The drivers side had to have all the inner side wire brushed off and repainted. the lip on the tyre side was also in bad shape, so that had to be sanded and fully redone. This was nothing compared to the passenger side though. While tyring to gently rub off some rust, i came across some bog in an old dent. After that, it just kept going! Thicker and thicker until it got over a centimetre thick! It was too much for me and I had to invest in a replacement panel. Luckily, they come quite easily from on line suppliers in the US, so I was soon sorted and applying some white paint. Sadly, Mum and  Dad arrived before I could really get it right, so I  can still see the imperfections (I'm probably the only one that notices though).

After sorting the metal stuff, I felt like the interior was a bit neglected. I took the back seat out and applied a coat of vinyl dye. It came up really well and made me thankful that I hadn't stumped up for the new upholstery. While I was in there, a new transmission lever cover and some new chrome work finished things off.

After selling the good old Audi Allroad and the 330xi (for a solid loss mind you) we dropped the Mustang off at the transport transport company and waved goodbye to the good ol' US of A. After a quick visit to the East Coast, it was over Perth and  back to work. Part of the package was access to the company car, which meant I was cruising around in a Honda Accord for 6 months. The shame was nearly as bad as the boredom! Luckily, when Belinda arrived, she insisted on us getting a car of our own. So after a quick look around, we ended up with a 2005, e87 120i. Nice little hatchback and so much more rewarding to drive than  the Honda. 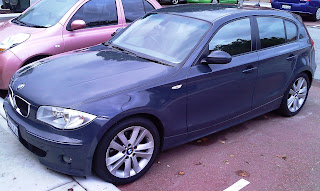 After giving the Honda back, we found it a bit annoying to be without a car when the e87 needed servicing, so we decided to have the e21 323i shipped over. It made it safe and sound, but I didn't realise it wasn't registered anymore, so I'll need to get a whole lot of stuff fixed (windscreen, emissions system, etc) before it can be registered. Should be ready some time next year. So now we're back in the homeland, have bought another BMW and have a "spare" car in the garage to fiddle with and repair. Sounds like things are getting back to normal then. 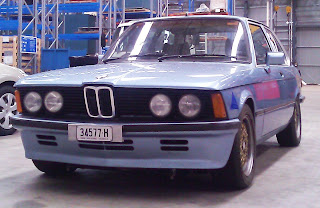 Posted by Pete Kilner at 2:36 am No comments: