Finally, some forward progress on the Mustang last night. I managed to get one of the harnesses installed. It's not perfect by any means, but it's in and a lot safer than that single lap belt. 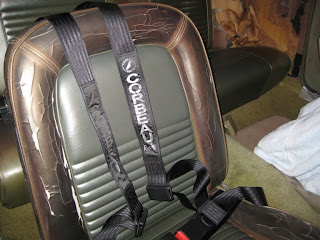 I also got some time to wire brush the passenger side door trim where it was all "rusty". Not sure if it was rust or 40 years of built up arm sweat (gross!) but it came off with a wire brush and wire wheel on the drill. There's a before and after shot below. All I have to do now is get some time on it to get the paint on. 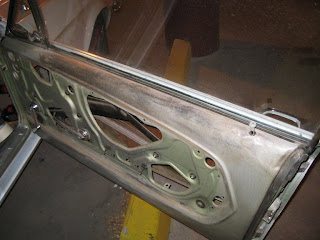 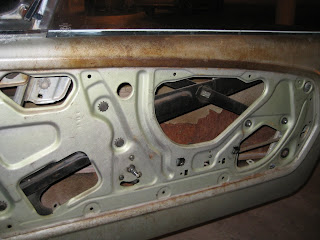 Also got under the rear to check that leaky area in front of the axle. The good news is, it doesn't look like fuel. It is a red oily substance. Looks like transmission fluid to me, but I can't work out what it's doing way back there. 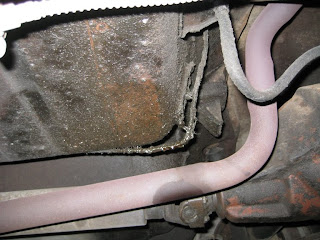 Posted by Pete Kilner at 7:04 am No comments:

Started work on the interior of the Mustang last night. A whole lot of boxes turned up with parts, so I thought it would be a good time to get cracking. 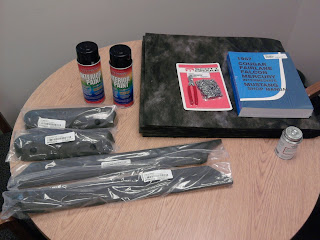 We've got trim parts, headliner, seat upholstery, paint and harnesses to put in. The harnesses are top priority for me as the old lap belts are just not safe enough. 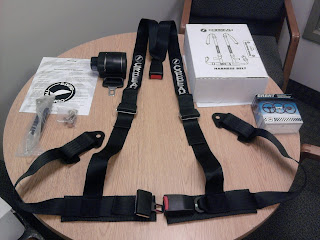 The headliner should go in first as all the trim around it will need to be removed to get it in. I don't really want to remove them twice!

Once I got into it, things got a little messy. The door trims came off OK but under the back seat was just a garbage tip! 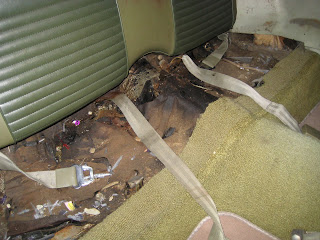 I think I'd better take it down to the car wash and use their industrial vacuum. I think our Dyson would explode if I tried to suck all that up with it.

I don't understand why, but Ford attached the door arm rests with two meaty hex head screws. Why not just a couple of little Phillips heads? Maybe that would make my life too easy.

I needed to get the door trims off so I can rub back the door panels and get some paint on to them. 40 years of arms resting on the window sill have removed the paint and replaced it with surface rust. Not bad, just going to be tedious.


I got all of it out in the end. Even the rear set belt mount where I'm going to mount the harnesses. Worryingly, while I was under there, I noticed what looks like a fuel leak. I'll have to get the professionals on to that one! 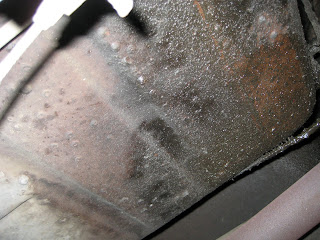 I'm going to install the harness on to the seat belt mounting point for the rear seat belt. It should work well. I just need to get a piece of angle and drill some holes in. Would be easy if I had a garage, work shop or even a drill! 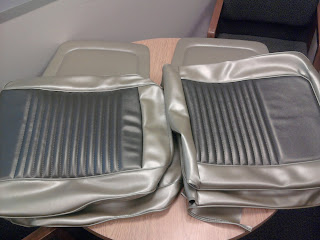 The seat upholstery is going to be a tricky one too. It looks simple to cover the seats then clip them on, but I'm guessing this could turn into a fairly serious job.

I'm looking forward to the steering wheel getting here too. They sent me the mounting kit, but now wheel. That old plastic one is cracked as hell so they put a cover over it. The cover would be OK, except it's not tied on so the cover just slips over the wheel if you don't grip it tightly!
Posted by Pete Kilner at 8:34 am 6 comments:

I've started collecting the engine parts I'm going to need to build up our new track motor. So far, I have the new double valve springs, valve retainers and valves. The valves are 1 mm oversize, so should provide a bit better breathing ability. 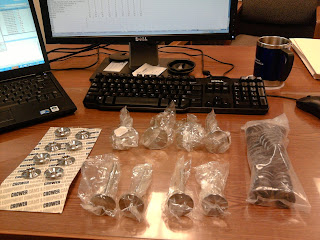 I've also got new pistons, clutch, aluminium flywheel, camshaft and sump baffle on order. Should be about 5 weeks plus shipping to Australia from California. The pistons are custom 11.7:1 JE pistons designed to suit the cam, the e21 1.8i head and are 2 mm oversize. The cam is a Top End Performance grind with 316 degrees duration and 11.5 mm lift. I decided to go even bigger than the 304 to make the most of the other mods and to keep the current engine running by not having to take parts out to re-use. By the time we port and polish the head, the engine should breathe a lot better. We're looking for around 180-190 bhp which should give the e12 the power to weight similar to an e30 M3!
Posted by Pete Kilner at 3:42 pm 3 comments: