While the Mustang has been getting prettied up with interior trim, the e12 has been getting more serious on the track front. A new roll cage has been installed to improve the safety department. There was much internal debate in Team Orange as to the best way forward for cage. My initial thoughts of a simple bolt in 4 point were in stark contrast to Dad's idea for a welded in full tower-to-tower cage! We ended up settling on a bolt in 6 point cage with harness bar and side intrusion bars. Looks fantastic and should do the job if the worst happens. 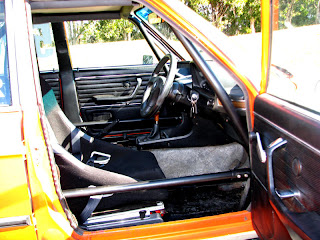 There were some fiddly issues such as the glove box not opening anymore, the rear window winders not being able to be turned and the sun visors not being able to be lowered. The rear windows are not a problem as they haven't been lowered in years. The sun visors are annoying, but a pair of sunglasses should fix that. The glove box was more of an issue. The latch for the bonnet is in there, so it has to be able to be opened. In the end, the glove box was just taken off. We'll work something out later. 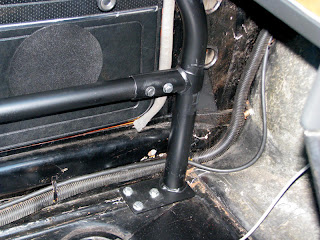 Dad's biggest concern was that the extra weight would slow him down! Luckily, the new engine components were shipped last week, so the build can commence as soon as they arrive down under. 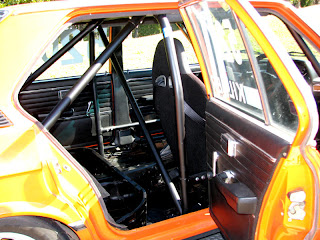 Posted by Pete Kilner at 9:21 am No comments:

The interior on the Mustang is starting to come together with some slow and patient work by the "Chief Mechanic" (me). Slowed down mainly by the poor workshop facilities (my bathroom) and the lazy and incompetent staff (me again), it's been a slow process. Luckily, the addition of the e46 has taken the pressure of the Mustang so things can stay apart for longer.

The first step was the completion of the interior panels. The paint on the trims and new arm rests made a huge difference for what was small change. The door trim panels themselves are still the old ones. I just gave them a bit of a clean and stuck them back in. Yes, they have a crack or two and all the chrome is gone, but they still look decent enough. 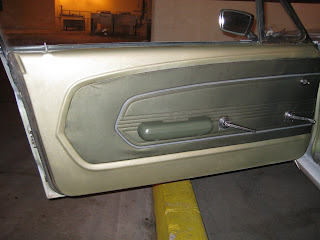 With the panels done, it was on to the steering wheel which I had previously prepared with a few coats of varnish. The wheel itself went in quite easily and looks awesome. The horn button is a piece of work though! The pieces they sent didn't seem to work and then the wheel itself came with a different electrical connector which was supposed to solve the problem. Don't get me wrong, the button makes the horn work fine; it just keeps the horn on continuously which can be a little annoying and distracting for other drivers! I think I have a work-around involving electrical insulation tape, some drilled out washers and a great deal of swearing. 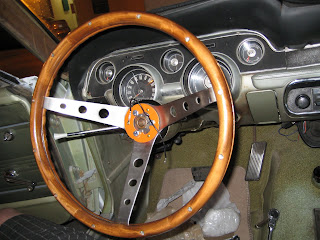 Finally, the front seats. I purchased some new vinyl upholstery and after reading the instructions in the "trusty" Ford workshop manual, got to it. The work shop states (roughly) "Remove existing upholstery and install new upholstery with dog clips." Yes, that is what I did. It just neglected to mention the multi-layer install, removing securing wires and the amount of skin I lost on those bloody dog clips. The results were well worth it in the end and I no longer cut my rear just getting in on those old seats. 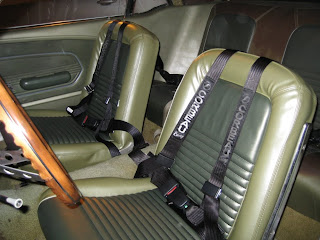 Still to come, headliner, front end suspension (can anyone say "Unsafe at any speed"?) and new tyres. Fun, fun, fun!
Posted by Pete Kilner at 8:53 am No comments: