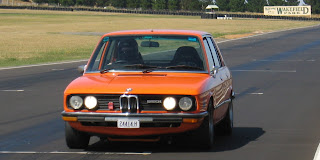 A depleted Team Orange headed to Wakefield Park for the 2nd round of the BMW Drivers Club NSW Supersprint Championship on the weekend. There was no e21 as Bel had other things to do that couldn't be put aside, so there was just Dad and myself there to fly the flag.
The track was newly surfaced and promised some very interesting times. It was hot (as expected) which didn't bode well for getting any top times though.
The morning sessions went well with an unofficial 1:20.00 being recorded which would have been a personal best. Bleeding the brakes the previous day had brought them back stronger than ever and I had an enormous amount of confidence into the corners. Unfortunately, there was a very slight vibration under braking in the afternoon timed sessions which ruined my confidence and added 2 seconds to the lap time. Investigation revealed nothing wrong with the brakes and what appeared to be a flat spot on the front left tyre, so I headed back out determined to push on.
It was well worth it as the vibration started to fade away and the lap times dropped. I got down to a 1:20.3 then 1:19.6 then a 1:19.0. A wonderful result and fantastic to be in the "teens" with some of the seriously quick guys.
It was a win in class A cementing the e12 at the top of the table after 2 rounds. It was good to see a 5 person turn-out for class A and the competition was inspiring. With some new tyres on the way for next time, there should be some more speed at Eastern Creek.
Posted by Pete Kilner at 11:08 pm